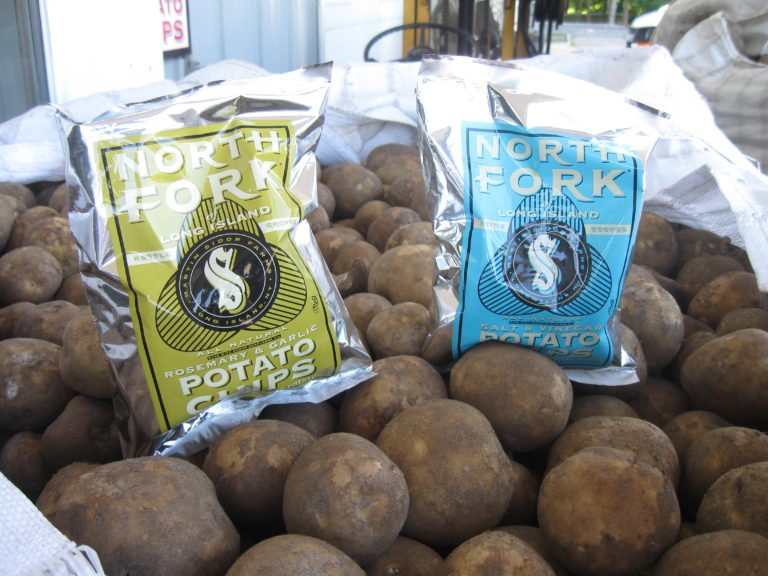 This article first appeared in The Independent Newspaper

More than a century ago, in 1910, Sidor Farms began in Mattituck as a 170-acre potato farm. Faced with competition from large, commercial potato farms, in 2004, Martin Sidor and wife, Carol decided to do more than just sell spuds. That year, North Fork Potato Chips was born.

“When we first started out, very few chip makers were using sunflower oil. We wanted to produce the healthiest chip possible,” Carol Sidor explained. “Now a few others are giving it a try. I guess you could say we were trendsetters in this healthy respect.”

The Sidors enjoy making their own chips, including such daily tasks as soil preparation, potato disease prevention, and machinery maintenance.

Turning approximately 100 cases per day, which equates to 1200 large bags or 4800 small bags, the hands-on farming practices of the company keeps the majority of work right on Long Island but as the demand grows so does the need for outside help. The Sidors employ four-time production workers at its facility, as well as a three-person cleaning crew. The owners also employ seasonal help for planting and harvesting seasons.

“There’s just something about breaking the ground and smelling the fresh earth that gets our adrenalin going,” Martin Sidor said. “If you are a farmer — a true hands-in-the-dirt kind of person — you develop a sense as to how a particular crop might turn out each year. You see the plants growing, monitor how things are coming along, and make adjustments as necessary.”

An influx of information, such as consumer marketing data, blight forecasts warning of crop diseases, and new technology helping soil improvement contribute to the growing success of the

“Having farmed for more than half a century, we’ve learned a lot about how to keep things growing and making the most of our land. The key now is to combine that hands-on knowledge with new data and ideas. The better you can do that, the longer you are going the stay in business,” Martin said.

The North Fork contains a loamy soil, providing for delicious potatoes. Back in the heyday, there was once more than 30,000 acres of potato fields on Long Island. That number has since decreased to around 1500 acres due to competition with larger farms in other areas which pay lower costs to raise an acre.

North Fork Potato Chips are primarily sold on the East End, Brooklyn, and Manhattan, in addition to San Francisco.