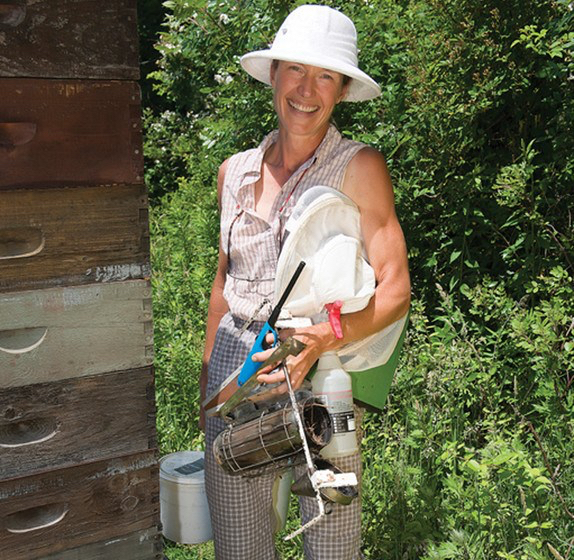 By NikkiOnTheDaily in Food, Travel on February 17, 2018
No comments

This article originally appeared in the February 14, 2018 issue of The Independent Newspaper

Mary Woltz is in a very sweet “bees-ness.” Her company, Bees’ Needs, is an artisan honey company based in Sag Harbor, producing only raw, unheated, and unfiltered honey. Woltz’s apiary consists of 13 separate bee yards, primarily located on farms.

“I haven’t purchased any bees since 2005, preferring to increase numbers by dividing my own colonies and catching swarms, in hopes that the bees will better adapt to local conditions,” Woltz explained.

Honey making is a detailed process, said Woltz. The Queen, the sole egg-layer per hive, begins laying her eggs in late winter and builds her colony from a few thousand to 100,000 by mid-to-late summer, dependent on season and colony strength. Peak weather for outdoor bee activity begins around the low 50-degree mark, when the insect seeks out pollen for protein and nectar for carbohydrates. The honey bee travels, cumulatively, 50,000 miles, or twice around the Earth, collecting nectar from two million blossoms, which all gets turned into a single pound of honey. Come mid-June, the honey supers are extracted. A super is a box placed on a hive with frames of comb to collect honey from a honey bee hive.

Woltz emphasized, “I only take the surplus, making sure each hive has what it needs to get through the winter.”

A thin layer of wax capping each cell, the form seen in honeycomb, is then cut off with a hot knife and the honey is then put into an extractor (a spinning metal tube to release the honey) which is strained into a pail, or “honey-gate,” and then fills each jar.

Bees typically only travel up to two miles for food, a radius of nearly 8000 acres. Meaning, each jar offers flavors true to the surrounding landscape, she said.

Bees’ Needs seasonal varietals include Early Harvest, “Marvelous May,” the first harvest of the year that is primarily composed of black locust blossoms; Middle Harvest, “Juicy July,” a golden color representing the flavors of linden, sunflower, lavender, and privet; and the Late Harvest, “Fabulous Fall,” a dark, rich flavor of goldenrod, Japanese knotweed, asters, and buckwheat. Her honey has received top honors at the Good Food Awards for three consecutive years, an award that takes into consideration the production process as well as the honey itself.

Woltz said, “I consider the farmers, and others who host my bees, as both partners and important supporters of my work, since many sell my honey at their farmsteads or stores. Channing Daughters not only sells my honey but also uses it in their Vervino (vermouth).”

She added that both Marders and the Peconic Land Trust have provided frequent opportunities to speak on the vital role bees play in the ecosystem.

Bees are on the decline, which Woltz and Bees’ Needs, is aiming to prevent. When the queen bee stops laying her eggs, in early December, Woltz treats the bees for varroa mites (a parasite that causes infections and shortens a bee’s lifespan).

Woltz has lost a third or more of her honey bee colonies each year for the past decade. She pleads, “Please plant trees, shrubs, and flowers for the bees. Don’t spray or spread things that kill them.”