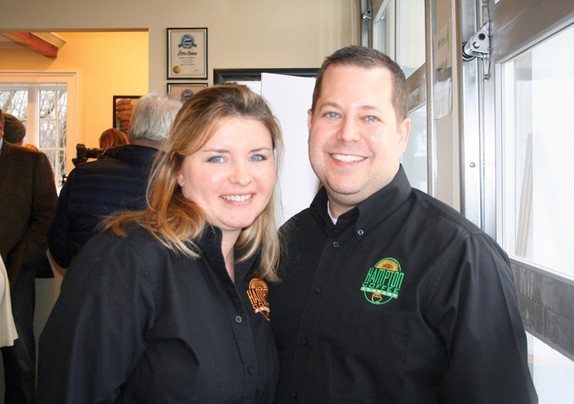 By NikkiOnTheDaily in Charities & Non Profits, Food, The Hamptons on February 17, 2018
No comments

This article originally appeared in the February 14, 2018 issue of The Independent Newspaper

The Ellen Hermanson Foundation will host its annual Denim & Diamonds event on Saturday, March 10, from 6:30 to 10 PM at 230 Elm Street in Southampton.

The team behind Hampton Coffee Company, including owners Jason and Theresa Belkin, will be honored for over a decade of involvement with the organization. Shirley Ruch and the South Fork Bakery and Dr. Louis Avvento of the NY Cancer and Blood Center will also be honored.

What began in 1994 as a single, small espresso bar in Water Mill, Hampton Coffee Company has grown into Long Island’s largest independent coffee roaster. With several locations on both the North and South Forks, including a Mobile Espresso Unit and Coffee Roaster, it still remains family owned, with a strong emphasis on the surrounding community.

The company helps out more than 100 organizations annually throughout the towns they serve. “We support things our employees and customers are concerned about,” said co-owner Jason Belkin. Charities it supports, besides the foundation, include the Animal Rescue Fund of the Hamptons, The Retreat, and the Water Mill Community Club.

“We appreciate this organization so much,” said Belkin. “People have needs all year round. They’re here, like we are.”

Although not personally affected by cancer, Belkin admires the emphasis the foundation places on treatment availability, despite one’s ability to pay.

Native to East Rockaway, Belkin and his wife, Theresa, who originally called Ireland home, have raised their kids in Westhampton Beach for the past 15 years. They have witnessed the grueling winters where many businesses, and charities, struggle for support. “It’s always harder in the winter. Summer is so much easier for people to come out,” Belkin opined.

In addition to philanthropy, the company practices “keeping it green.” Solar panels sit atop the roof of its Water Mill café, and it uses energy efficient LED light bulbs company wide. Single cups are made in the U.S., producing 30 percent less greenhouse gas emissions, and its Java Jackets are printed with vegetable-based inks, making them recyclable and compostable. The company even manufactures its own K-cups, using recyclable material.

Jason and Theresa Belkin, along with 20 staff members from Hampton Coffee Company, are slated to attend the Denim & Diamonds event. Interested in attending? For more info, visit www.ellenhermanson.org.